Yesterday was our annual Cherry Blossom Festival for ages 6-12!

This is the third year we've done the program, and it's always a favorite of mine. We start with a short story program and then have activity stations around the room that the kids can rotate through. It's scheduled to go an hour, but the kids stayed until we kicked them out after 75 minutes (another group had the room reserved, so we had to clean up fast!)

This book isn't about Japan, but is about an anthropomorphic Japanese-American cat. Importantly though, it's about sushi. Are there any other picture books about sushi?

After I read this, I always ask if the kids have ever tried sushi. This year, 7 had!!!! We talked about it and how raw fish sounds gross but is actually very tasty. We talk so much about sushi, because one of the activity stations is candy sushi.

My awesome story-teller colleague told a story about Japan called "That's totally true!" from the book Stories To Play With by Hiroko Fujita. This is a great story because it has a lot of audience participation. Lauren recommends almost everything from the book.

Then, I told some choice, super-gross facts from the very cool book You Wouldn't Want to Be a Samurai!: A Deadly Career You'd Rather Not Pursue by Fiona MacDonald.

In this part of the program, you could also sing a Japanese song or learn some Japanese.

THEN! It was activity station time! Here are the stations we had: 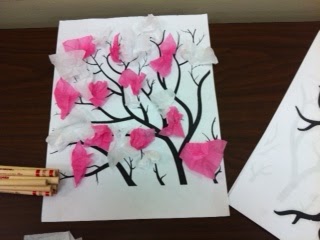 I really liked this craft idea, where you use straws to blow India Ink around paper to make your cherry branches in a way that mimics traditional Japanese art. You then glue tissue paper to your branches. BUT! Blowing around India Ink in the library sounds like maybe not a good idea, so I had pre-printed branch templates! I found clip art of leafless trees, copied them into word, made the image fill the page and then printed them out. I used two different trees, so kids could choose their preferred look. I used this full-sized tree and this close up of branches (I used the one at the bottom). 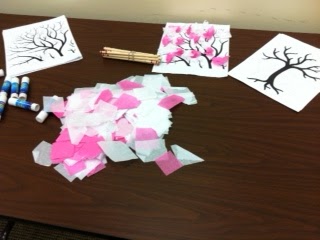 I also cut out several small squares of white and pink tissue paper before the program, and then had kids wrap the paper around the end of a pencil, glue stick it, and stick to the paper. Easy peasey and really pretty. You can also have them just ball the paper up (which works better for younger kids.) 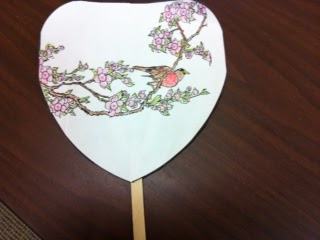 We used these great fan printables and had the kids color them in, cut them out, and tape on some tongue depressors. Very fun for a wide range of ages. 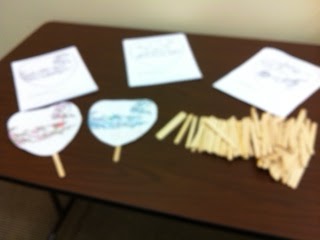 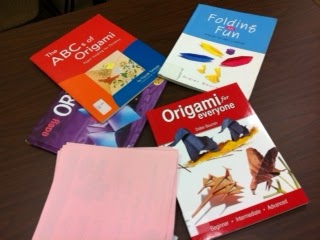 I cut a bunch of old fliers so they were square to use for paper. I had the paper out with some of our origami books for the kids to play with.

One year, I'd like to also have a kite craft. This one sounds really cool, but we can't have to kids outside (too much traffic!) so I haven't done it. 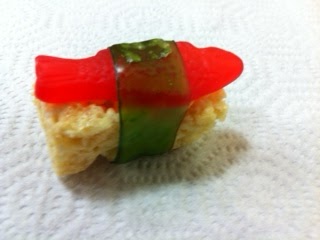 I'll be honest. We started this program because I wanted an excuse to do a candy sushi program. But, this year was the first year that I could actually EAT the candy sushi. We always do this over spring break, and always manage to schedule it during Passover when I can't eat corn, which means no high fructose corn syrup, which means no candy. *le sigh* BUT NOT THIS YEAR!

Some years, I also have Pocky, which is a Japanese snack that's basically a chocolate covered crispy breadstick. I have the kids use the Pocky as chopsticks to eat their sushi, then the Pocky. It's a lot of fun. 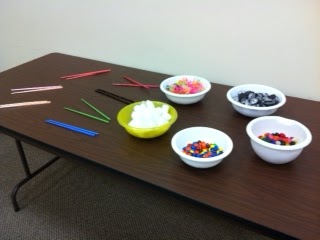 We have chopsticks and things to try to pick up with chopsticks. If you can pick it up with the chopsticks, you get to keep it. In order of easiest to hardest, the bowls are: 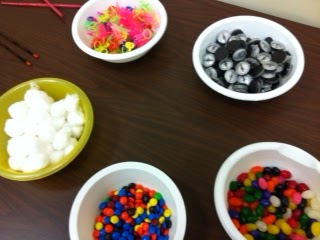 During the activity station portion of the program, we play I mix CD I made from my personal collection of Japanese Pop music. It features a lot of music by Puffy Amiyumi and Shonen Knife and some other tracks I discovered through my Puffy Amiyumi Pandora station.

I also had a display of books about Japan, samurai, ninjas, and some translated manga aimed at younger kids.

This is one of our more expensive programs. Luckily, the tissue paper and craft sticks I bought last year got us through this year and will get us through next year and maybe even the year after that. The chopsticks are a one-time purchase (although ours were donated) and we were able to use little gee-gaws that we had lying around.

The main expense is the candy for the sushi. We have a great friends group that funds us. I bought too much (always the case) BUT! we'll be able to use the leftovers as snacks for our various book clubs. So, it'll all get used.

If we had a staff person who knew Karate, I'd love to teach some basic stances. Maybe one year we'll borrow the gaming equipment from the teens and have a Wii station. Maybe something with manga or anime?
Posted by Jennie at 1:02 PM