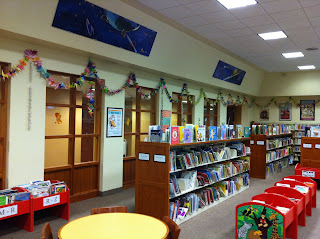 Last March, I posted that I was looking for something to do, programming wise, about the Japanese Earthquake and Tsunami.

What we ended up doing is folding 1000 origami cranes. In Japan, cranes are a sacred animal and tradition says that if you fold 1000, you can ask a crane for a wish. Our wish was for a speedy recovery for Japan. This was a passive program that just finished up last week.

How we did it:

1. I made a sign explaining what we were doing and why and put it in one of the display stands with our program fliers. It also said how many cranes we had left to go (the kids LOVED watching that number go down.)

2. I cut old program fliers down into squares and printed off several copies of instructions. (We used a few different versions over the past 7 months, depending on what came up first on our google search. These are good.)

3. We have a lot of after school care groups that come in. The first few days, I pulled the oldest kids aside and taught them how to make cranes. Once they mastered it, they taught everyone else.

4. When people saw the flyer (we also had a few cranes scattered around the desk) we gave them paper and instructions. If we had time, we would show interested people how to fold them.

5. We worked folding cranes into many different programs (hey kids! Let's fold cranes while we discuss this book!)

6. I kept count and sewed them together to hang up like garland around the room. 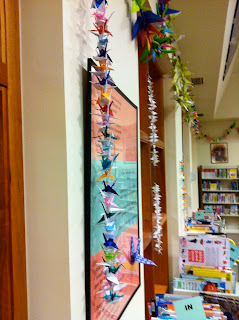 This project was great! Staff found folding cranes to be very therapeutic when things got crazy. The kids had something to do while waiting for computers and we managed to keep Japan and the earthquake and tsunami in our thoughts long after the news cycle had moved on to other things. It also gave them a long-range goal to work towards. AND! It was free. The vast majority of our cranes were folded from old program flyers. The really small white ones are from hold slips and computer guest passes. We did have some origami paper left over from something else and our Friends group bought some more for us, but it's not needed for the program.

Overall, it was a lot of fun and successful. I'd do it again. 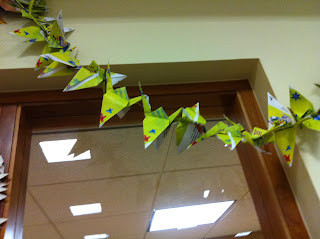